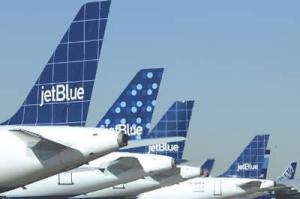 Yesterday’s incident involving the captain of a JetBlue flight underscores why there are at least two people on the flight deck during commercial flights.

The captain was locked out of the cockpit and wrestled to the floor by passengers after screaming about a bomb during a flight from New York to Las Vegas.

Obviously not a laughing matter. Imagine sitting in a passenger seat at 30,000 feet and the four striper starts banging on the cockpit door like Fed Flintstone. Then:

“He started screaming about al-Qaeda and possibly a bomb on the plane and Iraq and Iran and about how we were all going down,” Gabriel Schonzeit of New York City, who was seated in the third row, told the Amarillo Globe-News. “It seemed like he went crazy.”

A number of things went right though. First, passengers mobilized to demobilize the pilot who was apparently suffering from sort of panic attack. After 9-11, there is a clear change in how passengers react to threats. Whether it’s Richard Reid, the shoe bomber or Farouk of the crispy parts. We’re not going to just sit here and let you take this plane down.  It helped to have a retired corrections officer and a security executive on board. Also: The copilot did a great job of getting the pilot off the flight deck and amazingly, there was another off duty pilot on board ready to take the left seat.

Despite the quick reaction it’s publicity that JetBlue didn’t need after the weirdness that happened when their flight attendant Steven Slater began swearing at passengers on the public-address system and decided it was time to leave the company after  grabbing a cold brew,  pulling the emergency slide and spectacularly exiting the aircraft. 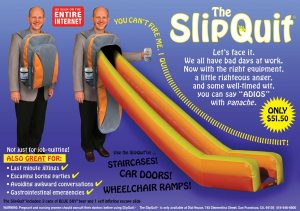 Which ultimately led to creative ideas on how to deal with tense situations.

A more dramatic example is the 1999 crash of EgyptAir flight 990 which was directly attributed (by the NTSB) to the first officer’s deliberate  departure from normal cruise flight due to his control inputs. He intentionally flew the plane into the ocean.  Most of us won’t change the way we travel. I won’t  and I regularly fly via part 121 commercial operations but after this (very rare) cockpit meltdown it reminds us of the criticality of one unbalanced person in the front of the aluminum  tube.  So,if possible,  I always greet the pilots when I board to see if they’re having a good day.  Otherwise, it might be helpful to know where the slide is.

This entry was posted in Commercial Aviation. Bookmark the permalink.