Upside down at 100 feet off the deck is not a good time or place to be slow applying the solution to the situation. We try to make sure they are ready for September. “Shifty” Peairs, Reno Racing Seminar Air Boss

A modified P-51D Mustang, Galloping Ghost, piloted by Jimmy Leeward crashed into the grandstands during the National Championship Air Races in Reno, Nev., Sept. 16 with the number of deaths now increased to 10 with dozens more injured.

Air races and air shows attract an estimated  12 million spectators a year in North America and every year there’s a handful of fatalities, usually involving only the pilot. 2011 will be an especially bad year overall.

While this airshow tragedy is the largest in recent memory, it’s not the worst. During 2002, 77 people were killed and 543 injured after a jet flew into a crowd of spectators at air base in Ukraine. In 1988, 70 people were killed, and hundreds were injured, during a show at the U.S. air base in Ramstein, Germany, when three jets from an Italian stunt-flying team collided. It will take months to determine the probable cause of the Reno accident but a missing trim tab might be the crucial element.

The recent edition of EAA  Sport Aviation magazine characterizes the annual Reno races like aerial NASCAR, with low-flying planes negotiating a course marked by pylons at up to 500 miles per hour.   Pilots accept significant risk associated with planes racing wingtip to wingtip at high speeds. The spectators at airshow events do not. The future of air racing is uncertain and at the very least, expect substantial changes.

Our thoughts and prayers go out to all those killed or injured from the crash.

The perfect cross-country trip combines a great flight with a great destination. So what better plan than to head to Wisconsin on a bright CAVU morning to the American Champion Aircraft factory, where they build the Decathlon, Scouts and Citabria’s?

The 8KCAB Super Decathlon was the first plane in which I had aerobatic training and I still love to fly it. It was altogether different from the standard Pipers and Cessnas with the stick in the center and fabric instead of an aluminum skin.  The designs and tooling date back to 1946 and they have travelled from the original company, to Bellanca until American Champion Aircraft purchased the type certificate in 1990 and began manufacturing Decathlons, Scouts and Citabrias, They’ve made a good design better by creating all-metal wings, although they remain fabric-covered.

GPS pointed the way to Fox River Airport “96C” as we descended to land onto the 2,500 X 37 foot runway by the plant. After parking the plane, we walked the entrance and were warmly greeted by the president of the company, Jerry Mehlhaff, Sr. who took us on a tour of the three-building facility. Jerry is an engaging guy who instituted continuous improvement throughout the manufacturing of these classic aircraft in the American Champion facility in Rochester, Wisconsin just west of Racine. This is a complete shop that designs the planes, assembles the wings, fuselage, tail section, control panel and paints everything. He’s bucking a trend: Maintaining manufacturing in the America. Not only has he continued to invest in the business but has found a way to continually reduce outsourcing of components. Although the engines, plexiglass and avionics purchased, American Champion has continued to vertically integrate their manufacturing so as to produce virtually all components.

Then the wing assembly area.

END_OF_DOCUMENT_TOKEN_TO_BE_REPLACED

Up in the Air

That’s a long way without a motor.

Sailplane pilot Gordon Boettger, of Minden, Nevada, broke his own Northern Hemisphere soaring record on May 31 by flying a total distance of 1,401 miles in his Kestrel sailplane in 13 hours, 17 minutes….He reached an altitude of 28,400 feet MSL and speeds as high as 165 mph. At times, his climb rate was 1,000 fpm.

Pretty impressive and it takes a lot more skill to ride thermals and mountain waves then straight and level in a powered airplane.  It’s also sufficiently long that I doubt anyone would want to break that record in the future.

Celebrating a birthday today. That of my brother who happens to be much older at + 3 minutes. Of course it was also mine.  I’m happy to report that I got exactly what I wanted. A round of golf with my three sons. They decided that a fair match would be me against the young men (they would shoot best ball among the three of them).  Notwithstanding strength and vitality of youth, the old man was still victorious. However, my knees were still barking back after starting the day with a 16 mile run as I continue to prepare for The Marathon. Old age isn’t for sissies.

Later a barbeque with the clan including grandsons.  Last year my birthday cake looked like a prairie fire so we opted for no candles. Who could ask for anything more?

I’ll never forget my first meeting with my father-in law. I was taking his beautiful daughter for a swim in Lake Michigan. He eyed me warily when I introduced myself , as a violinist handing over his prized Stradivarius to a gorilla. Having rolled up my clothes in a towel, we headed off to the beach. I had not yet realized that my underwear fell out of the towel and into the middle of the living room floor. When I returned he greeted me at the front door and held them at eye level saying “I believe these are yours”. I  stammered a quick thanks while looking for the nearest hole to crawl into. So much for first impressions. END_OF_DOCUMENT_TOKEN_TO_BE_REPLACED

Comments Off on Gone West

We interrupt our regularly scheduled aviation programming to bring you…diving. Why? Because I have pictures from the Florida cave dive. Not nearly as much fun as flying but still a great sport. Similar to aviation, equipment must be in good working condition, training is required and there’s risk management. Few venues are as risky as cave diving. Not night diving on a shipwreck. Not search and recovery in near zero visibility which is plenty creepy when a freighter passes overhead.  The water wasn’t nearly deep enough and we could only hear the engine but not see the screws. Ice diving? Only for those who have lost their minds after repeatedly freezing their brains.

Cave diving demands redundant systems and managing acceptable risk. The most important reason: No vertical egress. If you run out of air or have an emergency (embolism et. al.) you must return the long way and ascend no faster than one foot per second. A dive computer helps but a dive buddy is a safety requirement.

Another thing. Cave diving has plenty of challenge but there’s usually not much to see compared to ocean reefs and shipwrecks. The visibility is the best, so you can basically see nothing perfectly. The deepest I’ve tried was about 100 feet with none of it straight down. Did I tell you how dark it is without a dive light?

The sign behind me reads: “STOP – Prevent Your Death-Go No Further” The fine print below reads “There is nothing in this cave worth dying for”. Which is true. Longest time in an underwater cave does not produce a winner.

Flying and diving have something else in common: You can’t rationally explain why anyone should go up in a light airplane or down in an ocean. Below, my brother is ready to lead the way.

The best thing that ever happened to me is pictured to my left 33 years ago.   Cross country skiing for Valentine’s Day with lunch at Whole Foods which is what she wanted and shopping afterwards.  Some of the folks that eat there do love their tofu and wheat grass which is a bit much for me. The things you do for love. 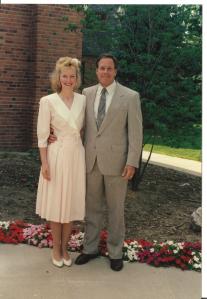 Doing What We Can to Help

The destruction in Haiti is unbelievable. The need is obvious given the staggering death toll and images of suffering within the poorest country in the Western hemisphere. There is virtually no infrastructure with a per capita income of around $1,000.

For the general aviation folks that stop by here, the Airplane Owners and Pilots Association (AOPA) suggests that: “The best thing pilots can do for now is to donate money and stay clear of the area. This will allow military aircraft and humanitarian agencies to get into the area and begin the relief effort”. They are encouraging pilots to consider donating the cost of a flight to Haiti instead of travelling there to help.

You should investigate the agencies carefully if you are considering to give. A few AOPA has suggested include: Samaritan’s Purse ; Missionary Flights International ;Catholic Charities. I’ve chosen to send our relief contribution for Haiti to  Mission Aviation Fellowship.

Please help if you are able. Every dollar counts and the GA community can make a difference.

Update: The Salvation Army is also a terrific relief organization with most all the donated funds going directly to the needy.

Update II: Here is a dramatic first person account from a Mission Aviation Fellowship family who experienced the earthquake and is doing what they can to help.

One of the more memorable messages of Christmas past from Anders, Borman and Lovell, inspired by viewing the magnitude of creation from space.

What image does the mention of Christmas typically conjure up? For most of us, it is a babe lying in a manger while Mary and Joseph, angels, and assorted animals look on.

Heartwarming picture, but Christmas is about far more than a Child’s birth—even the Savior’s birth. It is about the Incarnation: God Himself, Creator of heaven and earth, invading planet earth, becoming flesh and dwelling among us. God’s cosmic plan of redemption.

Rev 11:15 The kingdom of this world is become our Lord’s and his Christ’s, and he shall reign for ever and ever.

An old favorite from AvWeb

He completed his pre-flight, from the front to the rear,
Then he put on his headset, and I heard him yell, “Clear!”
And laying a finger on his push-to-talk,

He called up the tower for clearance and squawk.
“Take taxiway Charlie, the southbound direction,
Turn right three-two-zero at pilot’s discretion”
He sped down the runway, the best of the best,
“Your traffic’s a Grumman, inbound from the west.”
Then I heard him proclaim, as he climbed through the night,
“Merry Christmas to all! I have traffic in sight.”

Merry Christmas to all!